Lunch with my client and her new book!

Friday, June 11th I had the absolute joy of meeting up with my client Veronica at a beautiful French restaurant in Napa. Veronica’s book got published last August, in the middle of the pandemic so this was my first time to get to see her and congratulate her on this huge success!

I was just looking over my books from the clients I have coached and Veronica’s book marks book number 20 of my clients! I get thrilled with each one!

For those of you who have not met Veronica, let me tell you a little bit about her!

I first met Veronica the fall of 2014, we were both living in the desert near Palm Springs and she asked if I could come over and she wanted to share a few of the stories she had written. I agreed and I think she had about 3-4 stories from her memoir that she had written. This is what I remember about that meeting…when I left, her stories stayed with me!

I was planning on moving out of the area the first of December down to Baja, and wasn’t going to be accepting anymore private clients…but her stories! I knew that she just had to write her memoir.

After that when I came to Palm Springs to teach, Veronica would be there, we even had a private retreat together, then a group retreat in Arizona and she hosted my Maui retreat, where we also spent a few days alone working on her book before the retreat began. Veronica also came on my Italy retreat the fall of 2019…

You see Veronica had a drive, writing is not for the faint of heart. You have to believe and trust that your story will get written and then you have to go about and write it!

Like Anne Lamott says, put your butt in the chair! Trust that you do have it in you and that your story matters.

I have throughout the years I have been coaching women in memoir writing taught hundreds of women and have led retreats all over the world. I consider it an honor and a privilege when I get to walk with someone through their stories and witness the process. Veronica’s book is called Have you Seen these Children and you can purchase it on Amazon! It really is a book that you can’t put down! 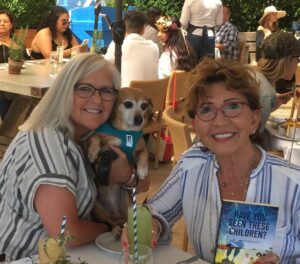 "Thank you for sharing this page" ~ Tammy

Submit your testimonial on the Reviews Page

I send occasional newsletters about upcoming workshops, classes, events and retreats . Receive effective tips, insights, and strategies to get those ideas from your head onto the page.
Write with me!
Subscribe Now And Let's Get Writing!